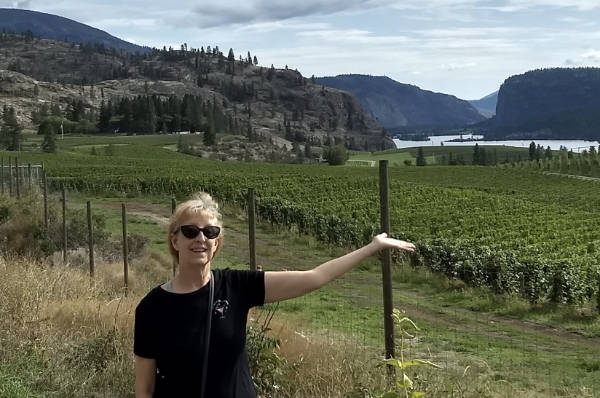 Hi, my name is Joan Donogh. I grew up in the small rural prairie town of Souris, Manitoba, Canada in the 60’s and 70’s. Every Sunday we would go to my Grandma and Grandpa’s for dinner. There were two alternating menus – roast chicken and roast beef.

My Grandma was Cornish, and she was defined by her cooking. She baked buns every week. There are stories that when we grandchildren visited we went straight to the fridge or the cupboard for a cookie, then we would say hello – but I am sure they can’t be true!

The only spices that existed in Grandma’s kitchen, I think, were salt and pepper. Plain, no nonsense, meat and potatoes, that’s how my Mother learned to cook. Although, for Mom, cooking was mostly a chore – making a full dinner, including dessert, day in and day out, for five people.

Luckily, I loved cooking, and I began at an early age to bake cakes and cookies, and soon graduated to casseroles, pies, and bread. I cut recipes out of the daily newspaper and tried them out every week. My two brothers became accomplished cooks too.

When I turned 18, I moved to Toronto, and have been in Ontario ever since. I lived in the Toronto area for around 25 years and worked in downtown Toronto. When I started working for myself I was fortunate to call Wasaga Beach, Ontario my home, and to be able to spend my summers in the Muskoka region of Ontario. Now I am lucky to live in the beautiful Okanagan Valley in BC (wine country – see the photo above!) And of course, my culinary experiences have broadened a lot. But still – there’s something about a taste of home.

And it’s a taste of home that has inspired Now….you’re cooking! Let’s share the food and memories of the past – and let’s make some new memories too!

The History of Now….you’re cooking!

Now….you’re cooking! was launched in 1998. I started out by publishing a category every month, as I worked to organize the family recipes I had here, there and everywhere. I must have been one of the first food bloggers! (Although I don’t think I had ever heard of a blogger back then, apparently the term was coined in 1997.)

I originally housed the site on the free hosting space I got from my ISP. They featured one of my recipes – Grandma’s Shortbread Cookies – on their home page around Christmas time, and my site was (temporarily) shut down because the bandwidth exceeded what I was allowed.

In 1999 I moved the site to my own domain name (donogh.com) where it remained for many years and experienced great popularity with people worldwide who were looking for recipes for foods that Mom or Grandma used to make. The “Comfort Food Classics” section of this website includes all the monthly “chapters” of the original website – I have included the original publication dates. I am not a fan of the current trend in recipe blogs that include huge (often largely unrelated) write-ups with dozens of photos (not to mention ads popping up everywhere) that you have to scroll through to find the recipe. So you won’t find that here! It is pretty much just the recipe, and maybe a wee bit of information about it.

In 2003, the Now….you’re cooking! Comfort Food Classics cookbook was published. I had the cookbooks printed and fulfilled orders out of my basement. In 2009, I redesigned the cookbook and moved production and fulfillment to Createspace.com (a self publishing division of Amazon.com) and the cookbook is available in print and Kindle formats through Amazon.